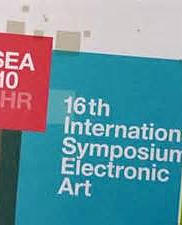 Since the majority of the world population now lives in cities, starry nights have become increasingly rare. However, our life is dominated by artificial heavenly bodies. In my installation I make satellite positions visible – the room becomes a planetarium, with satellites replacing stars. Laser pointers display the positions of satellites. Additionally, illustrative interpretation of the emerging (satellite-) constellations explain their meaning and reflect our technological contemporary mythology. The C64, iPod, Gameboy and Walkman are among zodiac symbols of satellite constellations.

Max Neupert is an artist and faculty member at the Bauhaus-Universität Weimar where he teaches Media Art. His recent audiovisual environment Breakup was presented in São Paulo, Melbourne and Weimar. Besides real-time A/V works satellites have been a research focus of his in the last years.

We are developing a new manifesto based on the Bogota Declaration of 1976 in which eight equatorial countries claimed sovereignty over the geostationary orbit. The declaration is a somewhat forgotten document about inequalities in technological power, the physics of orbit and its contested spaces. We will try to discover what the geostationary orbit can mean to us and define our own protests, rituals and love songs in relation to it.

Passion drives Alejandro Duque towards the attempt to interface place across all types of vectors and network protocols. While becoming the test ground. (colombian artist based in Switzerland – Ph.D. candidate at EGS.
Further Information: egs researcher at locusonus

This project is a broad artistic exploration of new phenomena originated by mobile communication/computing technologies. It consists of a series of experimental works, research activities, and workshops to investigate the media devices most closely connected to human bodies and its surroundings, and ultimately find new forms of individual expression with them. The goal of ITCH is to provide users (individuals) with mobile devices with tools that would allow them to by-pass the commercially-approved functions of their phones in order to manifest and perform their subjectivity in everyday life.

Andrés Colubri is a programmer, researcher and artist. His interests range from the algorithmic modelling of complex systems to the creative use of computer code for subjective expression and experimentation. He is currently involved in the development of the Android version of Processing.

Visualization strategies of knowledge in art are affected by progress, history and evolution. The displacement from uniqueness vision to complex models are analysed by Jameson in Cognitive Mapping and Buckminster Fuller with the Dymaxion map. There are 3 main fields of research: DATABASE VISUALIZATION: displaying information and knowledge with 600 existing models. MAPPING: visualization of cyberspace flows, density flux of communication networks and mapping the net. CARTOGRAPHY: based in social mapping, locative media, tactical media and media activism